Coca-Cola is looking at Cannabis derived ingredient – CBD (Cannabidiol) as a possible ingredient in health drinks. While this may seem strange at first we should remember that Coca Cola started out as a tonic containing botanical extracts including cocaine.

Coca-Cola is in talks with a major Canadian cannabis company, Aurora about creating a non-psychoactive cannabis-infused health beverage to help it expand into healthier beverages.

Coke isn’t alone, Pepsi, Red bull and other well known brands are planning to incorporate cannabidiol – a cannabis derived compound which has been shown to reduce inflammation, nausea and seizures.

The market for CBD is growing rapidly, and is expected to reach over $20 billion dollars by 2020. If Coke were to leverage their resources to the full they could likely capture a significant proportion of that market – perhaps as much as 10% according to some analyst.

CBD, not Marijuana or Cannabis

While coke is actively exploring the use of CBD, they were quick to distance themselves from cannabis.

“We have no interest in marijuana or cannabis. Along with many others in the beverage industry, we are closely watching the growth of non-psychoactive CBD as an ingredient in functional wellness beverages around the world. The space is evolving quickly. No decisions have been made at this time.” – Source: Inc Magazine. M

Why would Coke want to dive into the CBD world? CBD is the hottest new food, beverage and pharmaceutical ingredient. Coke needs to develop new markets as declines in soda sales erode many of it’s mainstay brands. Becoming a leader in the infused beverage space and piggybacking on the CBD boom while avoiding stigma associated with cannabis would tick a lot of boxes – if they can execute successfully. But there are real challenges to mainstream companies wanting to enter the CBD space.

Coca Cola has sought to address this by going with an obvious contender – one of the largest Canadian Cannabis producers. To an outsider like Coca Cola, this might seem like an obvious move but carries significant risks.

Aurora is currently the world’s largest cannabis company based on market capitalisation and greenhouse cultivation space, though this metric can be misleading and changes almost monthly with M&A activity.

Both Aurora and Aphria have significant cannabis production, and already have CBD strains – but how ready are the Canadian giants to enter large scale CBD production? The answer is surprising.

For Coca Cola, partnering with a cannabis company (as opposed to a hemp or ingredients company) carries significant cannabis industry exposure risk. Beyond that, there are real challenges in developing any food grade CBD beverage while the industry is still in it’s infancy.

The reality is Canadian Cannabis companies have excelled in raising money and growing cannabis, but mostly have little capability in the key components to produce CBD for nutraceutical, pharmaceutical and food grade products. US hemp companies are far more advanced in both cultivation and manufacture of CBD, so by relying on Aurora and Canadian production Coca Cola may be shooting itself in the foot.

Further, hemp extraction for CBD for use in foods and nutraceuticals is still prohibited in Canada, though this will change in a few months. Nonetheless, Canada lacks high quality hemp genetics required to efficiently produce food grade CBD. Canadian hemp has low CBD levels and isn’t grown to maximise CBD production. Canadian Hemp Biomass has low levels of CBD and isn’t grown with the high standards of quality required to produce a medical product.

Coca Cola isn’t the first beverage company to decide CBD is an attractive market – there are hundreds of smaller players making moves into the CBD space, but there are core challenges facing the cannabis derived compounds industry:
The hemp industry is still in it’s infancy – and struggling with issues such as legality, compliance, quality control, yields and manufacturing standards. Few manufacturers meet FDA requirements for GMP (Good Manufacturing) for hemp and CBD to produce a food grade, nutraceutical or pharmaceutical product.

This isn’t Coca-Cola’s first foray into the nutraceuticals or wellness beverage market. It already sells coconut water and Powerade which appeal to health conscious and active consumers – breaking away from the traditional soda/softdrink market.

Coca Cola’s best known use of plant botanicals and wellness marketing was for it’s original formula which contained Cocaine from the Coca plant. 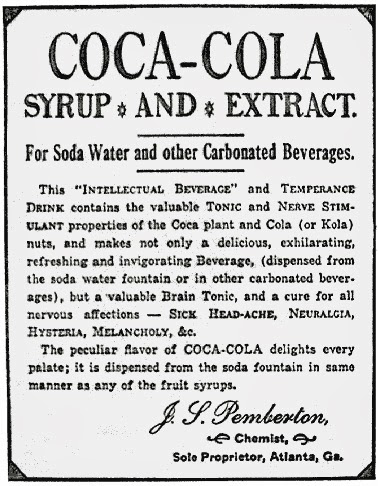 While Coca Cola’s move into cannabis-derived ingredients may seem surprising, in fact Coca Cola (the drink, not the brand) is synonymous with drug-beverage crossovers.
Remember that Coca Cola was originally developed with Cocaine as a key ingredient, only to change the formula later to incorporate other stimulants, colors and flavoring. The original Coca Cola had little in common with today’s recipe.
Today Coke remains the world’s leading psychoactive beverage company – yes Caffeine, like CBD is psychoactive – anything compound that triggers changes in mental state (such as stimulants like caffeine, theanine and chocolate ingredients in coffee, tea and chocolate) is defined as psychoactive.
CBD is often described as “non-psychoactive” – but it has been well documented that CBD can help with depression, sleep, anxiety, shizophrenia, and acts directly on nerve cells in the brain. A better description is that CBD is non-intoxicating – it doesn’t impair your ability to think clearly, and non-psychadelic – it doesn’t distort perception and sensation.W

What sort of CBD would Coke Infuse?

Given their statement that they have no interest in hemp or marijuana, it seems likely that Coca Cola would use a CBD API (Active Pharmaceutical Ingredient) such as CBD isolate, rather than using a full spectrum product such a hemp-derived CBD Oil or CBD Distillate. We can be confident they would not use a no-hemp cannabis derived CBD product (such as produced by top Canadian Cannabis companies such as Aurora) because this could not be legally marketed outside the cannabis regulations, and would be illegal for a US based company to handle.

Coca Cola’s interest in CBD may seem like a “me-too”, “shiny new thing” move, but is actually grounded in their long term innovation and growth strategy.

Coca Cola’s Move into CBD might be hard to decipher, except they’ve already shared their playbook and it’s very clear how it fits right in,.
In 2011 Coca Cola published it’s Liquid and Linkedin Brand Strategy Playbook, complete with some of the best whiteboard animation videos you’ll see.
In it Coke clearly spells out how it plans to consolidate it’s core business while expanding new markets and innovating into new industries.

Will CBD be the next evolution of Coca Cola?

About the Author: Dallas McMillan

Dallas McMillan is founder and President of Rhizo Sciences and leads the international hemp and cannabis activities. Recognised as a leading authority in production of truly medical grade cannabis, Dallas leads a team of agricultural, medical and pharmaceutical specialists with a passion for cannabis and hemp and the impact they can make on human health, the environment, and economies. Key to Rhizo Sciences' success in the industry has been an emphasis on leveraging proven technology, personnel and processes from traditional industries while honoring the unique value and characteristics of the cannabis plant and those who have worked tirelessly to bring it into the mainstream. Connect with Dallas on Linkedin or Email.